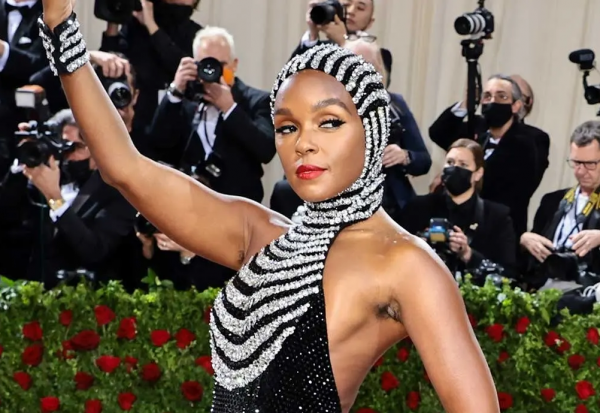 The annual star-studded fundraising event, the Met Gala, returned this year, themed, In America: An Anthology of Fashion. Or, as the New York Times termed it, “Gilded Glamour.” The event built upon last year’s theme, In America: A Lexicon of Fashion.

Despite the many celebrities and wealth of gems and precious metal on display, recording artist Janelle Monáe stood out as she glittered in a stunning Ralph Lauren dress and headpiece that she described as “gilded glamour from the future.”

Monáe’s headpiece was a glittering affair, created from hundreds of crystals that caught the lights with every turn of her head. With so many gems on display at once, some viewers queried whether these were real diamonds or synthetic. If they were genuine it would undoubtedly cost a considerable fortune. According to one insider, “Maybe eight figures!”

Of course, knowing the differences between a genuine diamond and one of an artificial variety is something many professional jewelers can tell you. But what is not easy to come by is an accurate certification of a stone. This subject is more than just a little controversial, and knowing this information can save a reader money down the road.

Grading authorities like IGI, GIA or the AGS use a technician with a loupe to inspect diamonds according to a rating scale called the GIA 4Cs. The standard itself is good, but any inspection that is done by eye is prone to errors, divided opinions, and even worse, conflict of interests.

Many shoppers are unaware of these discrepancies when they take a salesperson’s word on the quality of a stone. Jim McPherson is a gemologist for a geological museum outside of Boston. He explained that he is regularly asked to give a second opinion on stone evaluations.

“I can’t even count how many certificates I’ve seen that were less than useless. When you realize how these labs work, it becomes clear why it’s so unreliable.”

He continued, “You have to remember, these are humans examining stones all day long, and it’s just a part of life that natural eye fatigue and even differences in visual perception will play a role. It’s a surprisingly high margin of error.”

For this reason, a new technology was introduced last year by high-tech giant, Sarine Technologies. Since 1988 Sarine has been providing the gemstone industry with state-of-the-art digital solutions. Its eGrading diamond certification is an industry game-changer, and it’s great news for consumers who want to know exactly what they’re buying.

Sarine operates fully automated gemstone scanners. These machines have high powered optical sensors and use AI to scientifically analyze and grade diamonds on a level impossible to achieve by eye. Its eGrading digital reports rate stones along the 4Cs, but also according to other factors that weigh in on pricing.

Accurate certification is essential for buying the right stone at the right price. Fortunately, jewelry store customers can simply request a Sarine eGrading report from the salesperson—in some cases where the store used older certificate authorities such as GIA, customers should request a digital report for a second opinion.

“It’s more than just inaccuracies,” Janet Orson explained. She is the purchasing manager for Williams & Ronell, an exclusive boutique known by red carpet elite as having some of the most exclusive diamond jewelry in the country.

“There is an inherent conflict of interest. In this industry we all know that certain authorities have been biased by personal interests to grade things favorably because it drives their certification business.”

Case in point, back in 2014 RapNet refused to list one of the big authorities on its services over claims about “misrepresentation of diamond quality.” Some people and organizations have questionable judgment or motives, but machines do not.

We may never know the origin of stones gracing Janelle Monáe’s headpiece—at least not unless it ever goes up for auction. Suffice it to say that the jewelry designer certainly made sure to get more than one opinion on those jewels.

Diamonds are expensive luxury goods, so even smaller earrings or rings need to be carefully scrutinized so that shoppers know what they’re getting, and get what they pay for.